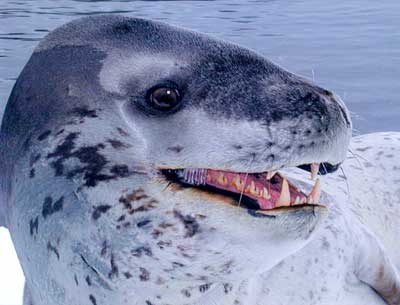 Leopard seals (Hydrurga leptonyx), also called a Sea leopard, is the second largest species of seal in the Antarctic (after the southern elephant seal). It is most common in the southern hemisphere along the coast of Antarctica and on most sub-Antarctic islands, but can also be found on the coasts of southern Australia, Tasmania, South Africa, New Zealand, Lord Howe Island, Tierra del Fuego, the Cook Islands, and the Atlantic coast of South America. It can live twenty-six years, possibly more. Orcas and large sharks are the only natural predators of leopard seals.

Along with all of the other earless seals, it belongs to the family Phocidae, and is the only species in the genus Hydrurga. The name hydrurga means "water worker" and leptonyx is the Greek for "small clawed".

The leopard seal is large and muscular, with a dark grey back and light grey on its stomach. Its throat is whitish with the black spots that give the seal its common name. Females are generally slightly larger than the males on average. The overall length of this seal is 2.4-3.5 m (7.9-11.7 ft) and weight is from 200 to 591 kg (440-1302 lbs). They are about the same length as the northern walrus but usually less than half the weight.

Like most carnivores, its front teeth are sharp, but its molars lock together in a way that allows them to sieve krill from the water, similar to the crabeater seal.

The leopard seal lives in the cold waters surrounding Antarctica. During the summer months, it hunts among the pack ice surrounding the continent, spending almost all of its time in the water. In the winter, it ranges north to the sub-Antarctic islands. Occasionally, individuals may be spotted on the southern coasts of South America, Australia, and New Zealand, and as far north as the Cook Islands. Juveniles are more often found in the north.

The leopard seal is a solitary creature and comes together in small groups only when it is time to mate. During the mating season, males and females make acoustic calls to each other over distances, with at least the males having individual variability in their vocalising sequence patterns. After a nine-month gestation, the female digs a hole in the ice, and gives birth to a single pup during the Antarctic summer. She protects the pup until it is able to fend for itself.

The leopard seal is bold, powerful and curious. In the water, there is a fine line between curiosity and predatory behavior, and it may 'play' with penguins that it does not intend to eat.

The leopard seal is second only to Orcas among Antarctica's top predators. Its canine teeth are 2.5 cm (1 in). It feeds on a wide variety of creatures. Smaller seals probably eat mostly krill, but also squid and fish. Larger leopard seals probably switch from krill to more substantial prey, including king, adelie, rockhopper, gentoo and emperor penguins, and less frequently, other seals such as the crabeater seal.

Around the sub-Antarctic island of South Georgia, the Antarctic fur seal (Arctocephalus gazella) is the main prey. Other prey includes penguins and fish. Antarctic krill (Euphausia superba), southern elephant seal (Mirounga leonina) pups and seabirds other than penguins have also been found in leopard seal scats in small quantities.

When hunting penguins, the leopard seal patrols the waters near the edges of the ice, almost completely submerged, waiting for the birds to enter the ocean. It is helped in this endeavor by the penguins themselves, which nearly always push one of their own into the water ahead of themselves. It kills the swimming bird by grabbing the feet, then shaking the penguin vigorously and beating its body against the surface of the water repeatedly until the penguin is dead. Previous reports stating the leopard seal skins its prey before feeding have been found to be incorrect. Lacking the teeth necessary to slice its prey into manageable pieces, it flails its prey from side to side to tear and rip it into smaller pieces.

Leopard seals are potentially highly dangerous towards humans, but attacks are rarely reported. Examples of aggressive behavior, stalking and attacks have been documented. In 1985, Scottish explorer Gareth Wood was bitten twice on the leg when a leopard seal tried to drag him off the ice and into the sea. His companions managed to save him by repeatedly kicking the animal in the head with the spiked crampons on their boots. In 2003, a leopard seal dragged snorkeling biologist Kirsty Brown of the British Antarctic Survey nearly 200 feet (61 m) underwater to her death, in what was identified as the first known human fatality from a leopard seal.

Leopard seals have shown a particular predilection for attacking the black, torpedo-shaped pontoons of rigid inflatable boats, necessitating researchers to equip their craft with special protective guards to prevent them from being punctured.