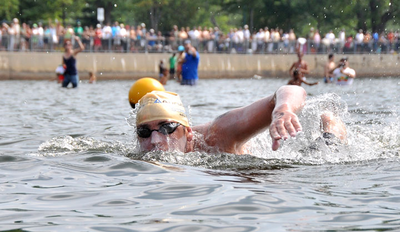 Le grand marathon 34 km is the 34 km Traversée Internationale du lac Memphrémagog, a professional marathon swimming race in Québec, Canada that is part of the FINA Open Water Swimming Grand Prix circuit. It is held in Lac Memphrémagog that borders the state of Vermont and Québec, Canada. It is one of the longest marathon swims in the world and one of the World's Top 100 Open Water Swims.

Under the management of Endurance Aventure, the Traversée Internationale du lac Memphrémagog offers the following events:

Before 1950, no one had attempted to cross lac Memphrémagog in a solo marathon swim. Lac Memphrémagog is a glacial lake located between Newport, Vermont, United States and Magog, Québec, Canada. But in the early 1950s, local Sherbrooke swimmer Lamontagne Lorenzo made the first attempts. On 9 July 1955, the 24-year-old swam for 21 hours 30 minutes before being pulled from the water 2 miles from his goal. Five weeks later on 21 August 1955, 19-year-old William Francis Billy O'Connor became the first person to complete a crossing of lac Memphrémagog in 18 hours 35 minutes, swimming from south to north despite a storm that hit near midnight.

O'Connor took a 10-minute break every hour to replenish his energy and power. After walking into lac Memphrémagog at 4:30 pm, and braving a storm late at night, he walked up on the shore of Magog at 11:05 am.

25 years after O'Connor's feat, the first crossing took place in 1979, a distance of 42 km between Prouty Beach, Newport (USA) and Pointe Merry in Magog (Quebec). The crossing was held during a summer festival with cultural programs, shows, vendors, and entertainment.

Swimming/Natation Canada and organiser La Traversée Internationale du Lac Memphrémagog under the direction of Jean-Luc Boisvert. The cultural part of the Traversée and overall event coordination is done by Productions du Palais while Endurance Aventure is in charge of the organization of the sport events.