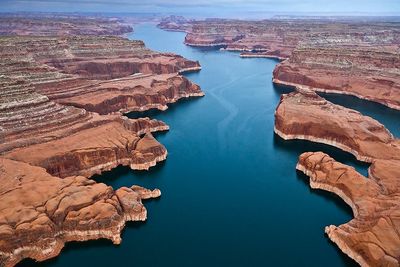 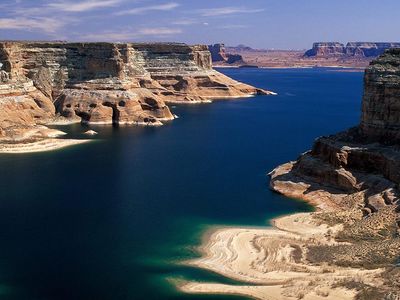 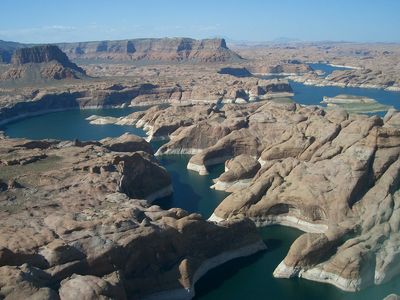 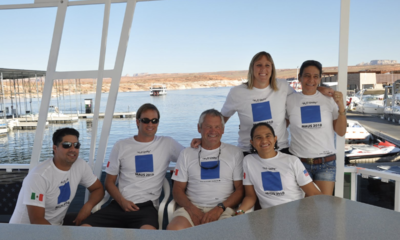 Lake Powell is a reservoir on the Colorado River, straddling the border between Utah and Arizona (most of it, along with Rainbow Bridge, is in Utah). It is a major vacation spot that around 2 million people visit every year.

It is the second largest man-made reservoir, by maximum water capacity, in the United States behind Lake Mead

Lake Powell was created by the flooding of Glen Canyon by the controversial Glen Canyon Dam, which also led to the creation of Glen Canyon National Recreation Area, a popular summer destination. The reservoir is named for explorer John Wesley Powell, a one-armed American Civil War veteran who explored the river via three wooden boats in 1869. In 1972, Glen Canyon National Recreation Area was established. It is public land managed by the National Park Service, and available to the public for recreational purposes. It lies in parts of Garfield, Kane, and San Juan counties in southern Utah, and Coconino County in northern Arizona.

Patty Kohlman: participated in two Olympic Games: Los Angeles in 1984 (18th place in 100m [[freestyle), Seoul in 1988 (23rd place in 100m freestyle). Patty is the first Mexican woman to swim under 27 seconds in 50m freestyle and is a member of the Sport City Elite Team.

Nora Toledano: Inducted into the International Marathon Swimming Hall of Fame in 2007. Nora was the first and only Mexican and first Latin American woman and sixth person in the world to complete a double crossing of the English Channel. She crossed the English Channel six times individually and 5 times on a relay. She’s co-author with Antonio Argüelles of At Every Stroke: the Endless Blue. She was nominated in 1994, 1997, 2005 and 2007 to receive the National Sports Award in Mexico.

Vito Bialla: Team Captain has completed multiple Ultra’s including Badwater, Ultraman, Ironman, and is still the only person ever to complete a six-day back-to-back Ultraman triathlons in 63 hours. He is an English Channel relay team winner in 2008 and a proud member of Night Train Swimmers.

Matthew Davie: has been open water swimming with Night Train Swimmers since the inaugural English Channel relay in 2008. He has completed several Ironman triathlons, an ultra run, and numerous ultra open water swims, including a crossing of the Strait of Gibraltar in 2009. He resides in San Francisco and runs digital publishing for a social gaming company.

Phil Cutti: is an ultra-endurance athlete and exercise physiologist specializing in thermoregulation and fuel utilization. He has completed numerous endurance events in running, cycling, triathlon and open water swimming. In his spare time, Phil strives for brewing the perfect pint of beer.