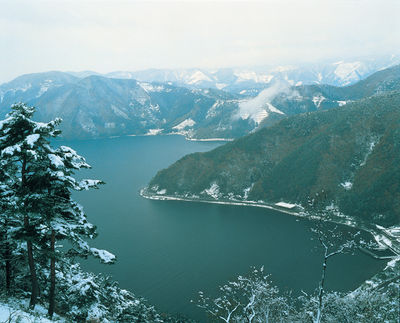 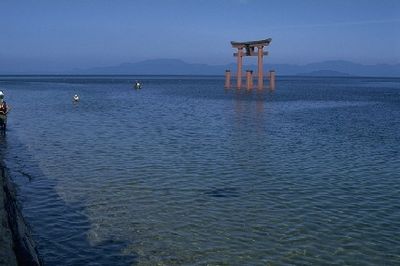 Lake Biwa (琵琶湖 or Biwa-ko) is the largest freshwater lake in Japan, located in Shiga Prefecture on west-central Honshu. It is the site of various open water swims including the Biwako Open Water Swim Race organized by the Japan International Open Water Swimming Association. Because of its proximity to the ancient capital, references to Lake Biwa appear frequently in Japanese literature, particularly in poetry and in historical accounts of battles.

The term of Biwako was established in the Edo Period. There are some theories about the origin of Biwako, but it was generally believed that a stringed instrument Biwa is related to Biwako. Kōsō, a learned monk of Enryaku-ji in the 14th century, referred to a clue of Biwako in his writing; "The lake is the Pure land of Benzaiten. Because she lives in the Chikubu Island and the shape of the lake is similar to Biwa, her favorite instrument."

The lake was formerly known as Awaumi (淡海, Freshwater Sea) or Chikatsu Awaumi (近淡海, Freshwater Sea Near Capital) and later Awaumi changed Ōmi, an etymology of Ōmi Province. The lake is also called Nio no Umi (鳰の海, "Lake of Little Grebe") in literature.

Small rivers drain from the surrounding mountains into Lake Biwa, and its main outlet is the Seta River, which later becomes the Yodo River and flows into the Seto Inland Sea at Osaka Bay.

It serves as a reservoir for the cities of Kyoto and Ōtsu and is a valuable resource for nearby textile industries. It provides drinking water for about 15 million people in the Kansai region. Lake Biwa is a breeding ground for freshwater fish, including trout, and for the pearl culture industry.

The lake's surface rises as much as three metres in spring due to melting snow and spring rains, and in autumn after typhoon rains.

Lake Biwa is home to many popular beaches along the southwestern shore, in particular, for example, Shiga Beach and Omi-Maiko.

The body of water has a running competition named after it – the Lake Biwa Marathon – which takes place in Ōtsu near the lake annually since 1962. Steven Munatones completed the first Lake Biwa Swimming Marathon in 1989, a 42 km solo swim across the lake.

Natural history of the lake

Lake Biwa is of tectonic origin and is one of the world's oldest twenty lakes, dating to almost 4 million years ago. This long uninterrupted age has allowed for a notably diverse ecosystem to evolve in the lake. Naturalists have documented about 1100 species in the lake, including 58 endemic species. Lake Biwa is also an important place for water birds. About 5,000 water birds visit Lake Biwa every year.

Recently the biodiversity of the lake has suffered greatly due to the invasion of foreign fish, the black bass and the bluegill. Bluegill were presented to the Emperor and later freed in the lake as a food source for other fish. Black bass were introduced as a sport fish. In July 2009 a largemouth bass weighing 22 pounds, 4 ounces was caught in the lake by Manabu Kurita. It has been officially certified by the International Game Fish Association to tie the largemouth bass world record held solely by George Perry for 77 years.

The Eight Views of Omi (近江八景 or Omi Hakkei) are the most scenic views of Omi Province, the present-day Shiga Prefecture, Japan where Lake Biwa is location. They were inspired by the Eight Views of Xiaoxiang in China. There are their ukiyo-e pictures drawn by Hiroshige.

They are sometimes erroneously called "Eight Views of Lake Biwa", but the latter were defined to include different locations in 1949 by the Shiga Prefecture government.

In 1989, Steven Munatones swam 42 km across Lake Biwa in a television special on NHK-TV in 10 hours 36 minutes. It was the first time Lake Biwa had been crossed by a solo swimmer.