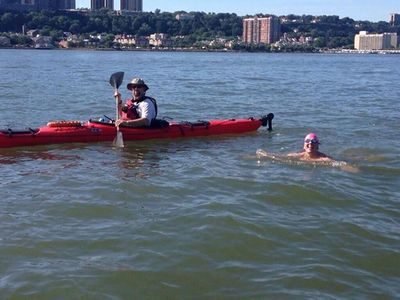 Karen Throsby, Ph.D. is on the faculty in the Department of Sociology in the University of Warwick in England. Throsby researches issues relating to gender, technology and the body. Her PhD research was on people's experiences of IVF failure, and she is the author of When IVF Fails: Feminism, Infertility and the Negotiation of Normality (Palgrave, 2004). She is currently writing a book on people's experiences of obesity surgery, and is working on an ESRC-funded research project on long distance open water swimmers. Karen convenes the third year module, Technologies of the Gendered Body, and co-convenes the second year module, Transformations. She also teaches on the MA module, Feminist Epistemologies in Action. She is also supervises PhD's in the areas of gender, technology and the body.

She completed the circumnavigation around Manhattan Island in the 2013 Manhattan Island Marathon Swim on 24 August 2013 where she swam her age in 8 hours 41 minutes during this quiet swim to achieve the Triple Crown of Open Water Swimming.

Throsby has completed the following swims: