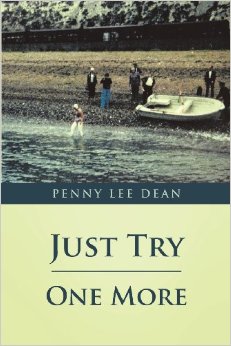 Just Try One More is an autobiography of Penny Lee Dean, Ph.D., the record holder in the English Channel and Catalina Channel.

Just Try One More is an autobiography of the challenging life of open water swimming champion, Penny Lee Dean. From ages two to twenty-four, she overcame physical, family, and life adversities to go forth and conquer the Catalina Channel and English Channel.

Behind the swimming story was a deep struggle of the relationship with her mother, Frances Dean. The intensity of this relationship is part of what drove Penny to achieve her goals.

Early in her life, Dean discovered that she had a talent and passion for open water swimming. After a setback when she was ten years old, she set her sights on the Olympics of open water swimming—the English Channel. After college, she traveled to Europe on a Watson Scholarship that allowed her to study with the national teams in nine countries and train for her attempt to break the record for the English Channel.

Part of the reason Dean wrote this book was the hope that she could help others tackle any of their life challenges and realize their own dream.

Dean is one of history's greatest marathon swimmers. She dreams big. With her two most cherished world records - one in the Catalina Channel and one in the English Channel - she realized her dreams. She did not merely swim across the channels - she attacked them like a world champion open water swimmer sprinting in one-mile segments. Her training regimens were renowned - triple workouts, 36,000-meter non-stop swims in the pool maintaining faster than a 1:20 per 100-meter pace.

She coaches and has influenced several world champions and world record holders as well as a number of marathon swimmers of all ages, abilities and background. She also authored one of the most influential marathon swimming books in history, entitled Open Water Swimming.