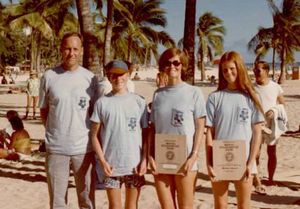 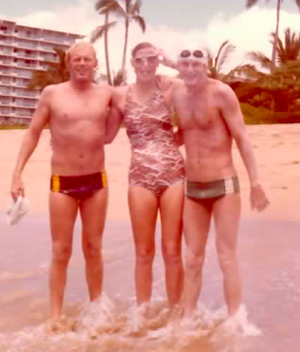 Judy Collins with Bob Justman and Bob Luce at the end of their 1977 Maui Channel crossing from Lanai to Maui in 6.5 hours

Judy MacGregor Collins is an American open water swimmer who was the first women to successfully cross the Maui Channel. She crossed in May 1977 together with Bob Justman and Bob Luce. She is also an inductee in the USA Triathlon Hall of Fame as a Contributor and a member of the Coronado Masters Association in Coronado, California. She and her husband John Collins also co-founded the Portobelo Panamá Triathlon in 1998 and are 1998 inductees in the Ironman Hall of Fame.

John Collins and Judy Collins were honored as Contributors in the Class of 2013. Creators of the Ironman Triathlon in 1978 in Hawaii, John and Judy Collins served as race directors of the Ironman Triathlon in Hawaii in 1978-79. The pair are Ironman finishers themselves, John completing the 1978 Ironman and Judy participating in the 2003 Ironman Revisited on the original Oahu course. Both competed in the first-ever triathlon in the U.S. in San Diego in 1974 along with their 12- and 13-year-old children. Taken with the sport, they convinced their masters swim coach to start the longest-running triathlon in the world (Coronado Optimist Sports Fiesta Triathlon in 1975). They were inducted into the Ironman Hall of Fame in 1998.

During an awards presentation for the 1977 Oahu Perimeter Relay, John Collins, a Naval Officer stationed in Hawai'i, and his wife Judy, who worked at the University of Hawai'i, decided to join three Oahu endurance events into one around-the-island triathlon. They made the formal announcement of the new event at the annual banquet of the Waikiki Swim Club. Swim the Waikiki Roughwater Swim (a minimum 2.4 miles), bike the Round the Island Bicycle Race course (for an estimated 112 miles), run the Honolulu Marathon course (26.2 miles). The triathlon would show who were the better athletes, swimmers or runners. The bicycle course would test both. They named their challenge event the Hawaiian Iron Man Triathlon. On 18 February 1978, 15 competitors, including John Collins, stood on the beach at Waikiki ready to take on the first-ever Ironman challenge.