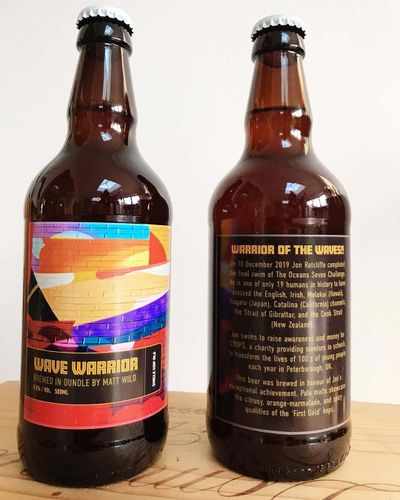 Matt Wild of brewbabu in Oundle, Peterborough, UK created a custom pale ale to celebrate Jonathan Ratcliffe's Oceans Seven achievement that was nominated for the 2019 WOWSA Awards in the World Open Water Swimming Performance of the Year category

Jonathan Ratcliffe is a 46-year-old open water swimmer and father of five children from Peterborough, England who has achieved the Oceans Seven on 10 December 2019 with a crossing of the Cook Strait.


Jonathan Ratcliff uses his Oceans Seven channel swims to raise money and awareness for CROPS. He valiantly completed the last 4 of his Oceans Seven channels in the final 8 months of 2019 with a massively difficult crossing of the 23 km Cook Strait in New Zealand. The 46-year-old father – whose wife and children accompany him in his escort boats – faced tidal challenges, whirlpools, currents and large ocean swells on his tough 11 hour 15 minute crossing from the North Island to Sound Island. Despite the cold water and difficult conditions that he faced right from the start until his last stroke, Ratcliffe was mentally focused and physically determined to become the 19th person in history to complete the Oceans Seven. For his charitable acts and swims that fund mentors to help develop the untapped potential of teenagers in Peterborough, for his difficult 8-month push to complete the Oceans Seven as a family affair, and for his long, difficult crossing of the Cook Strait on the last possible day of his swim window, Jonathan Ratcliffe’s Ocean Seven is a worthy nominee for the 2019 World Open Water Swimming Performance of the Year.