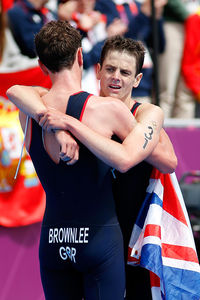 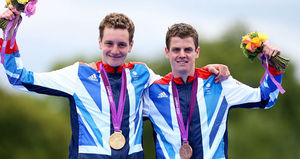 Jonathan Brownlee (born 30 April 1990) is the 2012 Olympic triathlon bronze medalist and a professional English duathlete and triathlete. Brownlee is a two-time World Sprint Triathlon Champion and is the former Under 23 Triathlon World Champion (2010). In 2011 he finished second in the world following the conclusion of the Dextro Energy Triathlon ITU World Championship Series in Beijing.

In 2010, Brownlee also represented the French club EC Sartrouville and took part in the prestigious French Club Championship Series Lyonnaise des Eaux, also called Grand Prix. In Dunkirk, at the first triathlon of this circuit, Jonathan Brownlee won the gold medal in the individual ranking and thanks to him EC Sartrouville could win the silver medal.

Despite a 15-second penalty, he won the bronze medal in the Triathon event at the 2012 London Olympic Games. In the five years from 2006 to 2010, Brownlee took part in 22 ITU competitions and achieved 14 top ten positions, among which 5 gold medals.