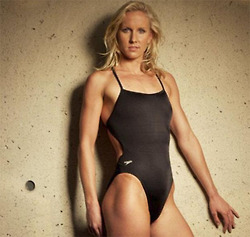 She has won 21 medals in major international competition, 11 gold, 8 silver, and 2 bronze at the Olympics, World Championship and the Pan Pacific Championship events. Hardy's breakthrough performance was at the 2005 World Swimming Championships where she won 3 silver medals and broke the world record in the 100m breaststroke. She was named USA Swimming's Breakout Performer of the Year in 2005.

After qualifying for the U.S. Olympic team in 2008, Hardy tested positive for clenbuterol and voluntarily left the team. The substance typically carries a two-year ban, but she ended up serving a one-year ban after she explained to the American Arbitration Association that her positive test was a result of a tainted nutritional supplement.

She trains under Dave Salo at the Trojan Swim Club at the University of Southern California.

She also won the Aquatic Capital of America Athlete of the Year twice in 2009 and 2011.