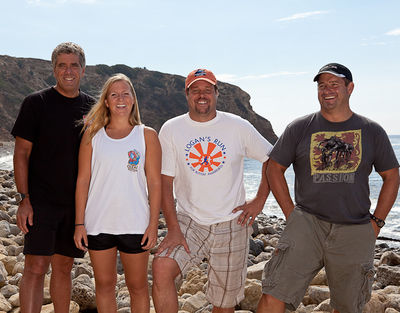 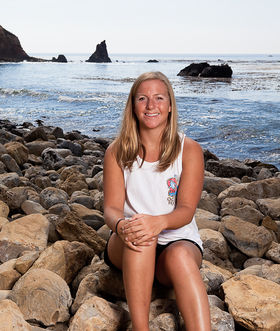 Jen Schumacher in front of the Catalina Channel 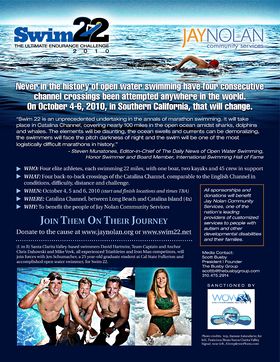 Jen Schumacher is a 34-year-old sport psychology consultant from Tarrytown, New York who educates athletes on the mental aspects of achieving excellence in sport. She serves as an Ocean Ambassador with Ocean Recovery Alliance and swims to raise awareness about the health of our oceans and reduce plastic pollution.

She teaches Kinesiology and Sport Psychology classes at California State University, Fullerton and is a Sport Psychology Consultant who educates athletes on the mental aspects of achieving excellence in sport. She works primarily with open water swimmers and credits much of her personal swimming success to her knowledge of the mental game and understanding what it means to be comfortable being uncomfortable. She is passionate about teaching these skills to other athletes and assisting them in their journeys to accomplishing their goals.

She studied at California State University, Fullerton with Dr. Ken Ravizza, Dr. Traci Statler, Dr. Andrea Becker, and Dr. Lenny Wiersma, some of the most esteemed sport psychology consultants in the world.

Schumacher has experience working with a wide variety of athletes, including swimmers, water polo players, triathletes, softball players, soccer players, and wrestlers, at the high school, club, and collegiate level. She works with Jamie Patrick who attempted The Great Lake Swim and The Long Swim.

She credits much of her success in channel swimming to working on her mental game and brings her unique experiences as a marathon swimmer to her sport psychology consulting.