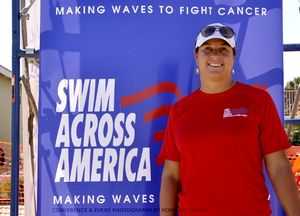 Janel Jorgensen McArdle (born 18 May 1971) has been a world-class competitive swimmer since high school when she won two gold medals at the Pan American Games. She won the silver medal in the 4x100m medley relay and finished 5th in the 100m butterfly as a 17-year-old at the 1988 Seoul Olympics in South Korea.

Jorgensen is the current president of Swim Across America, a non-profit organization that organizes charity swims and has raised over US$42 million for cancer research, prevention and treatment through swimming events all over the United States.

Jorgensen graduated from Stanford University in 1993 with a degree in psychology. During her career, she held four American records, was a 27-time All American, won 15 NCAA championship titles, and was inducted in the Stanford Hall of Fame. After college, she spent 12 years working at Oracle where she worked in strategic development and volunteered for Swim Across America.

Janel Jorgensen McArdle is the manifestation of success. Intelligent, well-spoken and passionate, the former Olympic butterflyer and record holder has been a champion all her life - and now she is championing the issue of funding research to find a cure for cancer. Through Swim Across America events, her abundant energies and charisma are channeled to support cancer research that can make a difference. Behind the scenes on a daily basis, outside the spotlight of the media, McArdle exudes hard work and dedication in helping organize swims. She is smooth and professional in front of an audience; she is educational and inspirational in front of volunteers; she is unselfish and unpretentious while doing mundane logistic work late at night and early in the morning in the process of organizing 17 open water swims. As the President of Swim Across America, she heads a national organization build upon the backs of thousands of volunteers and donors who have raised over US$42 million for cancer research, prevention and treatment. In a down economy, through her charismatic personality, depth of character and unstinting devotion, she leads an organization that continues to grow and do good year in and year out. For her generosity of spirit, for her talent in bringing people together, for her creativity in generating more donations for a just cause, Janel Jorgensen McArdle is a worthy nominee for the 2012 WOWSA Open Water Swimming Woman of the Year.

After volunteering for 18 years, Jorgensen decided to dedicate her life to ensuring the success of the program and growing Swim Across America’s impact on communities, families, individuals and cancer research. In 2005 she became the Executive Director and currently travels the country raising charitable funding and corporate support. She delivers many motivational speeches while working with hundreds of community groups on swimming programs and charitable fund-raising.