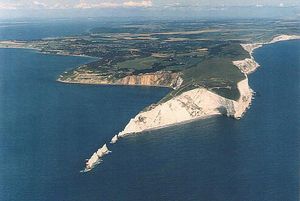 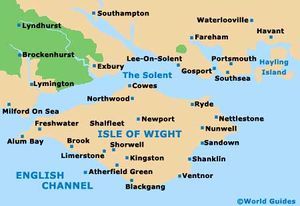 The Isle of Wight is a county and the largest island of England, located in the English Channel, separated from the mainland by a strait called the Solent. The Island has many resorts which have been holiday destinations since Victorian times. It is the finish of the 2014 Solent Swim Challenge, organised by Anna Wardley and the Ellen MacArthur Cancer Trust.

It has a rich history, including a brief status as an independent kingdom in the 15th century. Until 1995, like Jersey and Guernsey, the Island had its own Governor—most notably Lord Mountbatten from 1969–1974, after which he became Lord Lieutenant until his assassination in 1979.

The Island's maritime and industrial history encompasses boat building, sail making, the manufacture of flying boats, the world's first hovercraft and the testing and development of Britain's space rockets.

The Isle of Wight is approximately diamond-shaped and covers an area of 380 km2. Slightly more than half of the island, mainly in the west, is designated as the Isle of Wight Area of Outstanding Natural Beauty. The Island has 258 km2 of farmland, 52 km2 of developed areas, and 92 km of coastline. The landscape of the Island is remarkably diverse, leading to its oft-quoted description of "England in Miniature". West Wight is predominantly rural, with dramatic coastlines dominated by the chalk downland ridge, running across the whole island and ending in The Needles stacks—perhaps the most photographed aspect of the Isle of Wight. The South Western quarter is commonly referred to as the Back of the Wight because it has a unique social and historical background.