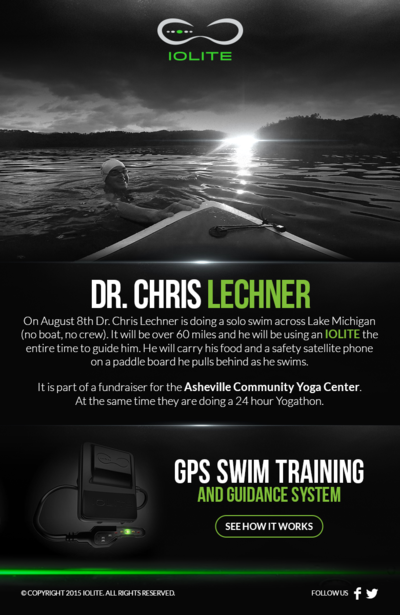 Dr. Chris Lechner uses an IOLITE in his traverse across Lake Michigan on 5 August 2015

noun - IOLITE is a high-precision tracking device that is worn on the back of swim goggles. IOLITE sends real time feedback during an open water swim directly to the goggles through a small LED array that provides input on the straightest swim possible. IOLITE analyzes the direction the open water swimmer is heading. If the swimmer veers off course, the LED lights will change colors to notify the swimmer what direction they should need in order to stay on course with significantly reduced sighting throughout the process.

Vikings were extraordinarily skilled navigators in the harsh conditions. According to the ancient Viking Sagas, the Vikings had a magical stone that could pinpoint the sun through heavy cloud cover or even when it was beyond the horizon, allowing them to navigate in otherwise impossible conditions. Scientists believe the sunstone was the mineral "iolite." Since the Vikings magical sunstone allowed them to navigate in harsh conditions and sail straight lines, the company executives (Stephen Holm, Raymond Rogers, Justin Peck) called their GPS open water tracking unit IOLITE.

Stephen Holm, Chief Executive Officer: He has continually brought creative solutions to dozens of Fortune 500 companies and saw a need for real-time guidance during the open water swim of triathlon events.

Raymond Rogers, Chief Technology Officer: He has worked in the IT and software development industry for over 15 years. He enjoys working with data and technology in every aspect of life. Once he started competing in triathlon, his desire for data and technology also found a new domain.

Justin Peck, Chief Operations Officer: He has been racing triathlons competitively for almost 20 years with a list of achievements including back-to-back series championships in off-road motorcycles, four USRA series championships, national winner and third overall winner in The Challenge of America’s series.