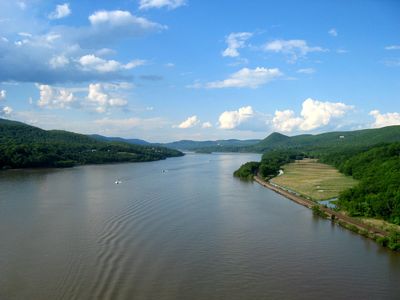 The Hudson River is a 315-mile (507 km) river that flows from north to south through eastern New York. It is the venue of choice of numerous open water swimming competitions and informal events.

The Hudson River rises at Lake Tear of the Clouds, on the slopes of Mount Marcy in the Adirondack Mountains, flows past Albany, and finally forms the border between New York City and New Jersey at its mouth before emptying into Upper New York Bay. Its lower half is a tidal estuary which occupies the Hudson Fjord.

The river is named after Henry Hudson, an Englishman sailing for the Dutch East India Company, who explored it in 1609.

The lower Hudson is actually a tidal estuary, with tidal influence extending as far as the Federal Dam at Troy. Strong tides make parts of New York Harbor difficult and dangerous to navigate. During the winter, ice floes drift south or north, depending upon the tides. The Mahican name of the river, Muh-he-kun-ne-tuk, means "the river that flows both ways."