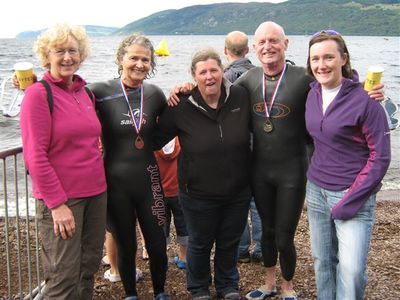 Helen Beveridge is a 50-year-old mother of three and an open water swimmer based in Scotland who came to the sport in 2011 after booking a SwimTrek Central Lakes weekend with friends. Within two years, she was able to call herself a Channel Swimmer. and within 5 years, she achieved the Triple Crown of Open Water Swimming. She is also one of the race directors of the Vampire Swims.

Muckle means very large in the Scots vernacular. The Muckle Four comprise the key four largest freshwater lochs of Scotland: the deepest (Loch Morar), the longest (Loch Awe), the biggest by volume (Loch Ness) and the biggest by surface area (Loch Lomond). Beveridge completed Morar, Ness and Lomond in 2016 and Awe in 2018. All swims have been ratified by the British Long Distance Swimming Association.

On 6-7 October 2013, Beveridge succeeded in completing a solo swim of the English Channel in support of Chest Heart and Stroke Scotland. With the guidance of CS&PF pilot Neil Streeter, she overcame big spring tides to successfully complete the 22 mile swim in 19 hours 27 minutes. Earlier in that year Beveridge completed an English Channel relay on 28 June 2013 with fellow team members Julian Oldfield, Pip Barry, Kathrine O'Brien, Ruth Beaver and Pauline Barker in support of Aspire, a charity who help people with spinal cord injuries to live independent lives.

In 2013, Beveridge's swims raised more than £5000 for charity. Subsequently Beveridge has completed further charity swims in 2014 for RNLI and 2015 again for Chest, Heart and Stroke Scotland. 2016 saw Helen raise money for the Highland Hospice and in 2018 for Niemann Pick UK. To date Helen has raised almost £15,000 for charity.

The 1st Loch Ness Vampire Swim saw 27 swimmers taking part with the letting of 15 pints of blood and £158 donation to the charity Bloodwise. Loch Ness has since hosted an annual Vampire Swim every year on the saturday closest to 31 October. The core aim to encourage blood donation and to raise money for Bloodwise has continued successfully with much fun enjoyed by all participants along the way.

Beveridge is a founder member of the Wild Highlanders, an all-ability group of open water swimmers based in the Highlands of Scotland, a member of the Inverness Swimming Club, and an ice swimmer.