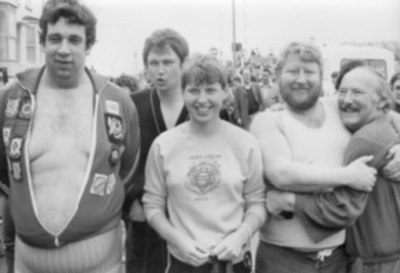 Gregory Schofield in 1982 with Mervyn Sharp, Philip Gollop who was the youngest at that time to cross the English Channel with his 13 hour 45 minute crossing in 1965, Jacqui Hampson who, with a time of 15 hours 32 minutes in 1982 became the youngest person to have swum across the English Channel, and Godfrey Chapman whose 13 hour 2 minute crossing made him the first Englishman to complete the Daily Mail race of 1951

From his own report which appeared in the 1965 BLDSA annual report: "20-21 August. Temperature 59-62 degrees F. Wind swinging to easterly, Force 4. Early Spring tides. Left Shakespeare beach 12:25 pm stroking 66 per minute for the first hour, raising to 72 per minute in the third hour when I stopped for the first feed, chicken, fruit juice, chocolate, glucose coffee, cold water. An hour later in the middle of the Channel about 10 miles off Blanc Nez, the chances of breaking a record looked good. Then came the long haul to get off Gris Nez before the tide started to sweep back up Channel. . . missed it and had to spend 8 hours swimming parallel with the coast, 3 miles off. As predicted, a strong wind blew up making the sea very rough, and consequently making me very sick, and unable to eat anything for the last 6 hours. I finally struggled ashore at 4 am, just below Wissant.