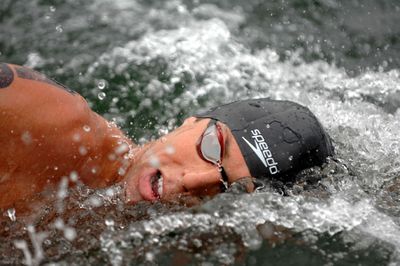 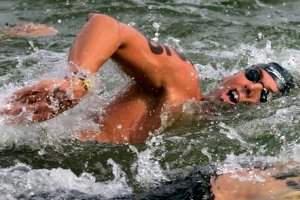 Grant Hackett OAM (born 9 May 1980) is a retired Australian competitive swimmer and open water swimmer. He worked for the Nine Network, often hosting Wide World of Sports. He works for Westpac as a banker.

Hackett was born at Southport on the Gold Coast of Queensland, the son of a policeman and younger brother of an Ironman champion.

During the 1998 FINA World Championships, he won the 1500m, but was narrowly upset by Ian Thorpe in the 400m. He also combined with Thorpe, Michael Klim and Daniel Kowalski to win the 4×200m freestyle relay, beginning a six-year winning streak in the event over the United States.

Entering the 2000 Sydney Olympics, Hackett was the overwhelming favorite in the 1500m freestyle, and was also expected to help Thorpe take a quinella in the 200m and 400m events. However, due to a virus the two finished eighth and seventh respectively. He followed this with an extremely slow swim in the heats of the 4×200m freestyle relay, and was dropped from the final quartet, being replaced by Todd Pearson. By the time the final of the 1500m freestyle came, Hackett had qualified third behind sentimental favourite Kieren Perkins, who was being vocally cheered by the crowd. In the face of the immense pressure, Hackett adopted a more attacking, fast-starting approach, and managed to hang on to claim gold.

Over shorter distances, Hackett has been somewhat overshadowed by his fellow Australian Ian Thorpe; with his versatility over varying distances often unheralded. Despite this, he is a hugely popular figure in Australia. His extroverted personality is in sharp contrast with Thorpe's more reserved style, and is more in line with Australian expectations of sporting figures. His major interests outside swimming are playing the guitar and motor racing.

At the 2001 FINA World Championships in Fukuoka, Hackett was in the peak of his speed. He set personal bests in the 200m, 400m, 800m and 1500m freestyle events, finishing second to Thorpe in both 400m & 800m, and bettering the 800m world record in the latter. Along with Thorpe, Klim and Kirby, they bettered the previous world record in the 4×200m freestyle. In the 1500m, Hackett attacked immediately, and stayed well ahead of Perkins' world record, and with the crowd standing and willing him on, he broke the record by 7 seconds, to claim gold. It is currently the oldest surviving swimming world record. Yet no competitor has bested it including up to and at the 2009 FINA World Championships, even with the use of the new high tech swimming suits like Arena X-Glide, Speedo LZR Racer and Jaked 01. Olympic champion Oussama Mellouli said it was an "epic record". It is the only long course world record in an Olympic event that predates 2008.

The 2003 FINA World Championships in Barcelona, Hackett picked up 5 medals, 3 gold, a silver and a bronze. Despite capturing individual medals in 200, 400, 800 and 1500 freestyle for the first time in an international meet, Hackett failed to break any personal best times let alone world records.

At 196 cm (six foot five) and 89.8 kg (198 pounds), Hackett won the gruelling 1500m race by sheer physical strength and stamina. He showed this in Sydney when he won despite having only partly recovered from illness, and again in Athens, when he survived challenges from swimmers (Larsen Jensen and David Davies) both six years his junior to hang on to win the race, despite a partially collapsed lung. This came after a solid swim in the 400 m to claim silver behind Thorpe, and a lackluster performance in the individual 200m, followed by a unconvincing swim in the lead-off leg of the 4×200 m relay, when he was 1.66 seconds off his best. His sluggish heat swim placed him third, raising concerns within the Australian camp. After the Olympics, it was revealed that one of his lungs was partially collapsed, leaving his total lung capacity diminished by 25%.

In 2005, Swimming Australia introduced the concept of a captain for the swimming team. Hackett was awarded this honour, and led Australia in the World Championships at Montreal, Canada. He won gold medals in the 400m, 800m and 1500m freestyle (silver in the 200m freestyle), the first person ever to achieve this feat, along with the only swimmer to medal in 4 distances in a single world championships. His victory in the 800m event broke Thorpe's world record, and his 1500m victory saw him become the first to win an event four times at a World Championships. He anchored the 4x200m team to bronze with a split of 1:44.84, making him the second fastest performer in relay splits. He was named as FINA's Male swimmer of the meet. He was named as the Australian Swimmer of the Year in 2005, and was also named the Swimmer of the Year by the Swimming World Magazine.

In November 2005, Hackett announced his withdrawal from the 2006 Commonwealth Games due to being unavailable for the selection trials because of a minor surgery to correct a shoulder injury. However, he was given dispensation to act as a non-competing captain in order to mentor the fellow swimmers in the lead-up to the competition.

In late 2006, Hackett relocated to Melbourne due to personal reasons. He attributed his disrupted preparation to adjusting with his new regime. Prior to the 2007 World Aquatics Championships, he presented a pessimistic outlook of his prospects.

He qualified last in the 400m event, but led in the final before fading in the last lap to take the bronze medal. He qualified fifth in the 800m event, but finished seventh, more than ten seconds behind the winner. In the 1500m final, Hackett came seventh, ending his decade long unbeaten streak in the event.

In December 2007, Hackett competed in and won his first National Championship 10 km Open Water race. By barely edging out veteran open water swimmer and Ironman Triathlete Ky Hurst, the pair both qualified for the FINA World Open Water Swimming Championships in Seville, Spain. However, Hackett failed to finish in the top 10 in this event, and therefore missed out on qualifying for the 10 km open water swim at the 2008 Beijing Olympics. He was also criticised for appearing to be overweight after the event, a claim that he rejected as "ridiculous" and was specifically due to Third Spacing.

At the 2008 Victorian Short Course Swimming Championships, his final Australian meet before departing for the Olympics, Hackett broke his own 800 meter freestyle world record - lowering the mark by almost two seconds to 7:23.42.

Though Hackett failed to qualify for the 10,000m; he succeeded in other events. He swam the 400m and 1500m freestyle and the 4x200m freestyle relay. In the 1500m he finished second, winning the silver medal behind Tunisian Oussama Mellouli. Had he won, he would have been the first male swimmer to win three successive Olympic titles in the same event, an opportunity denied to two-time Olympic 1500m champion Vladimir Salnikov due to the 1984 Los Angeles Olympics communist boycott. Hackett won the individual 200m freestyle swim at the Olympic trials but as he was not seeking a berth in the event he handed his spot in the Olympic competition in this event to the third place finisher at the trials, Nicholas Sprenger.