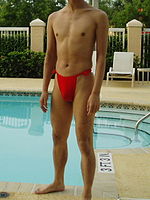 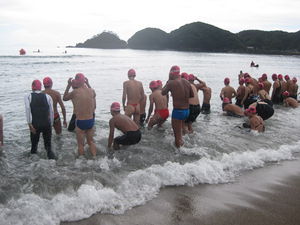 noun - Fundoshi is traditional Japanese undergarment for adult males. It is no longer widely used, but is occasionally still used in festivals and as traditional swimwear. Fundoshi are used by a few competitive masters swimmers including those in the Japan International Open Water Swimming Association events held throughout Japan (see male swimmer in the front row in the middle of photo).

In contemporary times, the fundoshi is mainly used as festival wear and is often twisted to create a thong effect at the back.

During World War II, Japanese soldiers who were lost at sea due to naval conflicts were told to unwrap their fundoshi and let it float behind them in order to make their appearance (silhouette) larger in order to ward off sharks.