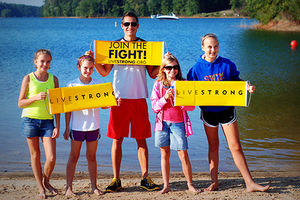 Eric Shanteau is an American Olympic swimmer who is a cancer survivor. He hosts the LiveSTRONG Open Water Event at Lake Lanier Islands in Atlanta, Georgia, USA on October 8th, 2011. the LiveSTRONG Open Water Event is a full day of open water swimming races and clinics with entertainment and Olympic swimmers in the spirit of kicking cancer to the curb.

Shanteau attended Parkview High School where he became a national swimming champion while maintaining a perfect 4.0 GPA. He swam at Auburn University where he was an 11-time All American. At the 2003 Summer Universiade, Shanteau won the silver medal in the 400m IM. At the 2005 Summer Universiade, Shanteau won gold in both the 200m IM and 400m IM, making him the first American to sweep both events.

At the 2004 US Olympic Trials in Long Beach, California, Shanteau placed third in both the 200m IM and 400m IM, just missing a place on the Olympic roster in both events. Shanteau also placed 11th in the 200m breaststroke.

Shanteau placed second in the 200m breaststroke at the 2008 U.S. Olympic Swimming Trials, guaranteeing himself a spot on the team set to compete in Beijing, China. The week before, Shanteau was informed that he had testicular cancer, but chose to compete in the meet regardless. He competed in the 200m breaststroke at the 2008 Beijing Olympics where, despite missing the finals by .13 second, he posted a personal best time. After returning to the United States, he underwent surgery. Shanteau is now in remission and active in cancer awareness.

At the 2009 US National Championships and World Championship Trials in Indianapolis, Indiana, Shanteau placed second to Mark Gangloff in the 100m breaststroke with a time of 59.45. In the 200m IM, Shanteau placed second to Ryan Lochte with a time of 1:56.00, making him the third fastest performer ever in that event. Shanteau won the 200m breaststroke final in 2:08.01, breaking his own American record he set in the preliminaries of the meet. All of Shanteau's final times in Indianapolis were personal bests, and he qualified to swim all three of his individual events at the 2009 World Swimming Championships in Rome.

At the World Championships in Rome, Shanteau placed second in the 200m breaststroke (2:07.65), and fourth in the 100m breaststroke (58.98). Shanteau was also part of the 4x100m medley relay alongside Aaron Peirsol, Michael Phelps and David Walters which won the gold medal in a new world record of 3:27.28.