Dr. Seán O’Connell setting off on the world's first island circumnatation around Bermuda as documented by the Guinness Book of World Records

Shark Bait: How I Battled Tides, Fins and Fatigue to Complete the First Non-stop Swim Around Bermuda is a fascinating, long-overdue autobiography about Dr. Seán O’Connell is a nominee for the 2017 World Open Water Swimming Offering of the Year, part of the WOWSA Awards, an annual recognition of outstanding men, women, performances and offerings around the globe sponsored by the World Open Water Swimming Association 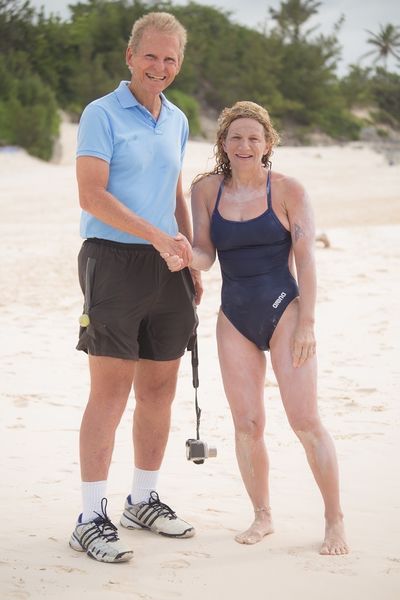 Dr. Sean O'Connell greeting Lori King after her circumnavigation around Bermuda in 2016

Dr. Seán O’Connell is an open water swimmer and a former lecturer in mathematics at Bermuda College. He is a member of the 24-hour club after he completed a 43 hour 27 minute, 37.5-mile (60.3 km) circumnavigation of Bermuda (Round Bermuda Swim) on 20-22 August 1976 that helped raise money for the Bermuda Physically Handicapped Association.

Dr. Sean O’Connell first attempted the swim in July 1976, but aborted after 35 hours. The first attempt started just opposite the main hotel entrance to Elbow beach. In his second attempt that was ultimately successful, he started and finished at a marker just outside of Ely Harbor by Robinson’s Marine.

His pioneering swim was documented in Captain Tim Johnson's History of Open-Water Marathon Swimming, an authoritative book on marathon swimming, and inspired the Round-The-Island Relay Swim in Bermuda on its 30th anniversary in 1976. The swim was listed in the Guinness Book of World Records 1978 UK edition under “island circumnatation”. His feat was also noted in Sports Illustrated's 25 October 1976 issue on page 111 in the Faces in the Crowd section.

Dr. O'Connell received a Ph.D. in mathematics from the City University of New York Graduate Center awarded June 1969. His thesis was in the field of combinatorial topology with Professor Fred Supnick as his advisor.

O'Connell coined the term circumnatation in 1976.

Dr. O'Connell wrote Shark Bait: How I Battled Tides, Fins and Fatigue to Complete the First Non-stop Swim Around Bermuda in 2017 about his unprecedented swim around Bermuda in 1976.

Shark Bait: How I Battled Tides, Fins and Fatigue to Complete the First Non-stop Swim Around Bermuda is a fascinating, long-overdue autobiography about Dr. Seán O’Connell's pioneering circumnavigation swim around his adopted Bermuda. His voice with a deep passion for adventure mixed in with youthful energy and exuberance comes through loud and clear in 110-page paperback. In 1976, the mathematics lecturer boldly took up a bet in a bar and raised money for charity in a mind-boggling attempt to swim around the island of Bermuda. The details of the concept, the planning and logistics that went into the swim, and how he came back from his first disappointing failure are riveting to read four decades after his 43 hour 27 minute 61 km circumnavigation swim. For documenting about an unprecedented swim long lost in the annals of marathon swimming, for bringing alive one of the longest and most arduous solo circumnavigations in the 20th century, for writing prose that rings true to any contemporary open water swimmer, Shark Bait is a worthy nominee for the 2017 World Open Water Swimming Offering of the Year.