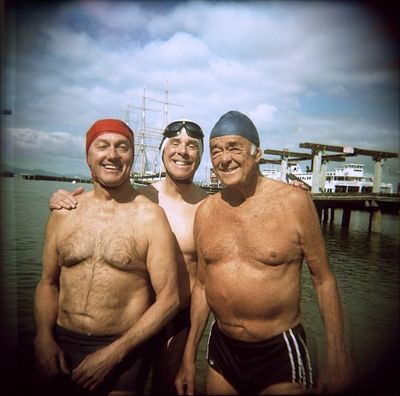 The Dolphin Club is a nonprofit, public-access athletic organization and an open water swimming pod with a diverse membership of about 900 women and men. Its members swim in the waters of Aquatic Park and participate in the annual Escape from Alcatraz Triathlon. The veteran members include the self-proclaimed Old Goats.

The Dolphin Club buildings are owned by the San Francisco Recreation and Parks Department and leased to the clubs. Both facilities are open to the public on alternate days each month, Tuesday through Saturday, for a daily fee of just US$6.50. Guests and members of the public must sign a waiver and an attendance log. The facilities include:

The Club has an exterior ramp for handicap access.

Alternating days with the South End Club, next door. Tuesday through Saturday, 10 am to 6 pm. Visitors deposit US$6.50 in the box at the entrance and sign the log book. Ring doorbell for access. The Dolphin Club is a nonprofit organization open to all.

Dolphin Club Members Who Have Crossed The English Channel[edit]