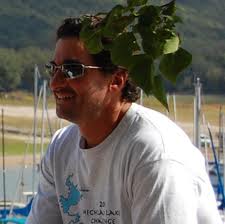 David Barra is an American open water swimmer and race director from New York who specializes in marathon swimming.

45-year-old Barra trained hard during the cold winter months in New York's Mid Hudson Valley to prepare for his remarkable year. Besides the hours in the pool, he was also acclimated to sub-10°C (50°F) water by swimming in lakes throughout the winter. He completed the following swims throughout the year:

Not since the heyday of International Marathon Swimming Hall of Famers Michael Read and Kevin Murphy has the marathon swimming world been graced by a working man and amateur swimmer so prolific and successful as Dave Barra (129.6 miles or 208K total in one season).

Humble, passionate and committed, Dave represents the good and the positive of the sport.

Barra created an expedition swim called the 8 Bridges | Hudson River Swim. As Dave explains, "This swim [follow via Twitter] has been on my mind for a long time. Last year, I started training in the Hudson River with Rondi Davies and she encouraged me to finally put it together. She has also done an incredible amount of the leg work required for such an event. Originally, it was going to be just Rondi and me swimming, but after a few conversations with the Coast Guard, we decided that we could handle a few other swimmers for the up-river stages. We have a maximum of 7 swimmers total for each of the first 5 stages. This number was determined by the capacity of the boat that we will have transporting us to our splash site each day. CIBBOWS has also provided us with much needed support."

Barra is a swim coach and guide with SwimVacation, an open water swimming tour operator in the British Virgin Islands and the state of Maine in the United States.

Barra served together with Brianne Yeates as an observer for Chloë McCardel's 126 km marathon swim from Lighthouse Beach on the southern tip of Eleuthera Island in the Bahamas to Nassau in 42 hours 30 minutes between 20-22 October 2014, completed under Marathon Swimmers Federation rules.