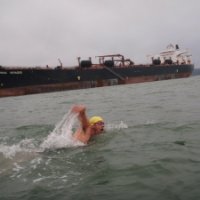 Connolly played college basketball at California State Bakersfield from 1989-1991 and has been a masters swimmer since 2005. He is a member of the Night Train Swimmers.

Q1. Why? It's a very beautiful and challenging route to swim that very few people get the chance to attempt. The Farallon Islands themselves are very well known, becomes a great conversation starter. Finally, I love the camaraderie of team sports as well as being in and on the wild Pacific Ocean. This event includes all of that, I feel really lucky and grateful for the opportunity.

Q2. What pace will you swim at? I want to try and push the pace on my first turn, give my team an edge on finishing by covering as much distance as I can. After that I want to maintain a good pace without totally wearing myself out in case I have to go in multiple times.

Q3. What hazards are there? Very strong currents that can push us away from making it to the Golden Gate, if that happens it will be that much tougher for us to finish. Thirty miles is long enough.

Q4. What is your frame of mind? I'm nervous but it's a good kind of nervous. I'm excited to see the Islands, want to swim hard and, most importantly...have some fun out there.