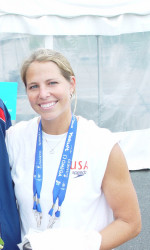 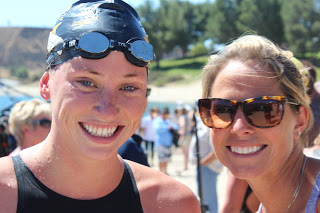 Catherine Kase was the head coach of the USA Swimming national and Olympic open water swimming team coach. The former distance freestyle swimmer from North Carolina is also the assistant coach at the University of Southern California and is appointed to the FINA Coaches Commission for the 2017-2021 term. She has coached 3 world champions and 2 Olympic medalists in the 10 km distance: Chip Peterson, Haley Anderson, and Ous Mellouli.

Vogt, after 8 years with the Trojans, is its Associate Head Coach for the men's and women's swim and diving team.

She previously coached at the University of North Carolina, her alma mater where she was a top distance freestyler. She has helped guide 15 swimmers at USC to All-American honors, including Katinka Hosszu, a three-time NCAA champion. Coach Vogt focuses her efforts on open water swimmers and USC's distance swimmers like Haley Anderson

Prior to coaching at North Carolina, Vogt coached at the Carteret Currents Swimming Club in North Carolina. She has also coached club teams in Virginia and Mississippi, and swam for North Carolina for four years in the distance freestyle (competing as Catherine Frock).

She graduated from the University of North Carolina in 2000 with degrees in education and psychology, and was named to the ACC Academic Honor Roll and Dean's List at UNC from 1996-99.

Day in and day out, early in the morning and late at night, University of Southern California coach Catherine Kase cares for her athletes with the maternal instincts of a tigeress. Beneath her perennial stunning smile lies a fiercely competitive nature. Her gorgeous blue eyes miss nothing and express much. The only coach at the 2012 London Olympics to personally coach both a male and female marathon swimming finalist, she went 2-for-2 in the Olympic 10K. Coach Vogt prepares her athletes strategically and tactically in practice so they can execute in the field of play. She exudes confidence that is implicitly understood and utilized by her athletes. With the Serpentine as her chess board, she advised the right moves at the right times for Haley Anderson (silver) and Ous Mellouli (gold). For her dedicated work on a daily basis, for her calm but intense demeanor on a feeding pontoon, on deck or onshore, for her success at the Olympics, Coach Catherine Vogt is a worthy nominee for the 2012 WOWSA Open Water Swimming Woman of the Year.