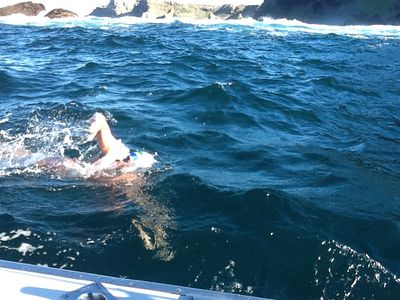 Cape Town (Afrikaans: Kaapstad; Xhosa: iKapa) is the second-most populous city in South Africa, the provincial capital, primate city of the Western Cape and site of numerous open water swims including the Cadiz Freedom Swim and home to world-renowned cold-water swimmers. It is also one location on the African Swim Safari tour.

As the seat of the National Parliament, it is also the legislative capital of the country. It forms part of the City of Cape Town metropolitan municipality. The city is famous for its harbour as well as its natural setting in the Cape floral kingdom, including such well-known landmarks as Table Mountain and Cape Point. Cape Town is also Africa's most popular tourist destination.

Located on the shore of Table Bay, Cape Town was originally developed by the Dutch East India Company as a victualling (supply) station for Dutch ships sailing to Eastern Africa, India, and the Far East. Jan van Riebeeck's arrival on 6 April 1652 established the first permanent European settlement in South Africa. Cape Town quickly outgrew its original purpose as the first European outpost at the Castle of Good Hope, becoming the economic and cultural hub of the Cape Colony. Until the Witwatersrand Gold Rush and the development of Johannesburg, Cape Town was the largest city in South Africa.

Today it is one of the most multicultural cities in the world, reflecting its role as a major destination for immigrants and expatriates to South Africa. As of 2007 the city had an estimated population of 3.5 million.

The center of Cape Town is located at the northern end of the Cape Peninsula. Table Mountain forms a dramatic backdrop to the City Bowl, with its plateau over 1,000 m (3,300 ft) high; it is surrounded by near-vertical cliffs, Devil's Peak and Lion's Head. Sometimes a thin strip of cloud forms over the mountain, and owing to its appearance, it is colloquially known as the "tablecloth". The peninsula consists of a dramatic mountainous spine jutting southwards into the Atlantic Ocean, ending at Cape Point. There are over 70 peaks above 1,000 feet (300 m) (the American definition of a mountain) within Cape Town's official city limits. Many of the suburbs of Cape Town are on the large plain of the Cape Flats, which joins the peninsula to the mainland. The Cape Flats lie on what is known as a rising marine plain, consisting mostly of sandy geology which shows that at one point Table Mountain itself was an island.

The Cape Peninsula has a Subtropical Mediterranean climate (Koppen Csa), with mild, wet winters, and dry and very warm summers. In winter time, which lasts from the beginning of June to end of August, large cold fronts come across from the Atlantic Ocean with heavy precipitation and strong north-westerly winds. The winter months are cool, with an average minimum of 7.0°C (45°F) and maximum of 17.5°C (63°F).

Summer, which lasts from November to March, is warm and dry. The Peninsula gets frequent strong winds from the south-east, known locally as the Cape Doctor, because it blows away pollution and cleans the air. The south-easterly wind is caused by a high-pressure system which sits in the South Atlantic to the west of Cape Town, known as the South-Atlantic High. Summer temperatures are mild, with an average maximum of 26.5°C (80°F). Cape Town can be uncomfortably hot when the Berg Wind, meaning "mountain wind" blows from the Karoo interior for a couple of weeks in February or early March.