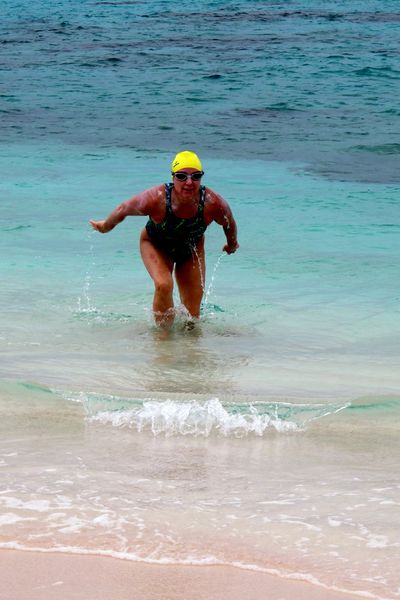 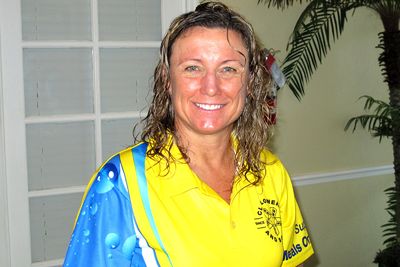 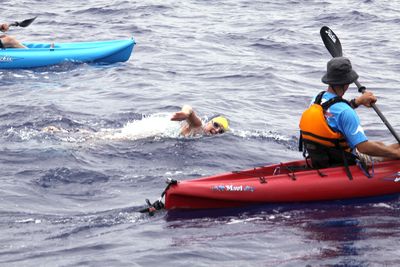 Palfrey is a mother of three and a grandmother of one from Townsville, Queensland, Australia. She is an inductee in the International Marathon Swimming Hall of Fame, originally from England with dual citizenship of Australia.

Formerly a world-class pool swimmer, Palfrey set records in the Strait of Gibraltar, Molokai Channel and Santa Barbara Channel as well as completed swims in the Cook Strait, English Channel, Catalina Channel and various other swims from Lake Taupo in Australia to the Cayman Brac Channel in the Caribbean Sea.

The Bridging The Cayman Islands was estimated to take Penny between 30 - 40 hours of non-stop swimming in seas where she will encounter waves, winds, currents and marine life. The swim is organized and sponsored by Frank Flowers of the C.L. Flowers Group in the Cayman Islands.

The Bridging The Cayman Islands was originally unimaginable, certainly unpredictable, and remains unprecedented.

She swam non-stop 67.26 miles or 4,840 laps of a 25-yard pool. She started from Little Cayman Island in the early morning hours of June 9th and finished on shore on Grand Cayman over 40 hours later.

She had an 65-foot mothership with medical staff, media and support crew. She was escorted by a second 65-foot boat from Red Sail and a smaller rubber boat. Her husband Chris Palfrey was on the 65-foot escort boat with a crew of seasoned support watermen from New York to Hawaii. Penny was always sandwiched between the escort boats and her kayakers that included Jeff Kozlovich of Hawaii and Richard Clifford of New York who constantly guided, fed and hydrated her. The entire 40-hour adventure remained a focused and intense as she encountered textured conditions, sharks, jellyfish, currents, hyperthermia, extreme macerated skin, internal swelling, external inflammation, extreme sunburn, and fatigued muscles.