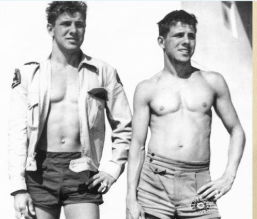 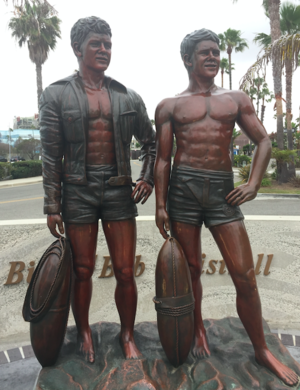 Robert "Bob" Meistrell (31 July 1928 – 16 June 2013) was an American businessman, philanthropist, surfer, and diver. Along with his twin brother Bill Meistrell and business partner Bev Morgan, Meistrell helped develop and market the first commercial neoprene wetsuit. This evolved into the Body Glove surf brand, which by 2013 was a US$200 million annual enterprise and a leader in the field.

Sons of a banker who was murdered when they were four, identical twins Bob and Bill Meistrell were born in Boonville, Missouri, on 30-31 July 1928. The youngest of seven children, Meistrell relocated to California with his family at the age of 16. Although Meistrell had not before that time even seen the ocean, he developed a fascination with it in early childhood. He and his brother taught themselves to dive in ponds in Missouri, using a bicycle pump, a garden hose and a diving helmet cobbled from household supplies.

In the early 1990's, he helped found the Catalina Conservancy Divers, a volunteer group involved in the protection and restoration of the waters around the island. Conservancy divers assist academics in studying the aquatic environment, planting sensors, counting species, and an unsuccessful attempt to reestablish the over collected abalone population.

Meistrell died on 16 June 2013 of a heart attack at the age of 84 while repairing his boat the Disappearance on Catalina Island, before setting off to be the lead boat for a paddleboard race. He was survived by his wife (Patty), three sons (Robbie, Ronnie, Randy), nine grandchildren (Tracey, Matt, Jamie, Nick, Kenna, Robert, Rhoni, Randi, and Makayla) and three great-grandchildren (Mia, Maddox, and Mila).