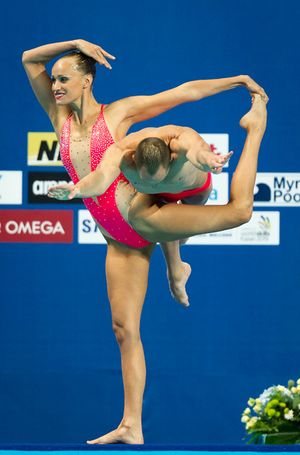 Bill May with Christina Jones at the 2015 FINA World Championships in Kazan, Hungary

O! is a water-themed stage production by Cirque du Soleil, a Canadian circus and entertainment company. The show has been in permanent residence at the Bellagio in Las Vegas, Nevada, United States, since October 1998. O, whose name is pronounced the same way as eau, the French word for "water", takes place in, around and above a 1.5-million-US-gallon (5,700 m3) pool of water, featuring water acts such as synchronized swimming as well as aerial and ground acts. The O theatre, which is designed to look similar to a 14th century European opera house, has 1,800 seats, thus allowing the performance to be watched by 3,600 people a night since the performance usually plays twice in a given day.