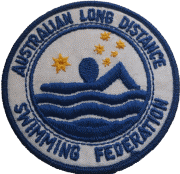 noun - The Australian Marathon Swimming Federation was an organization that governed the sport of marathon swimming in Australia between the years of 1980 and 1986.

The Australian Long-Distance Swimming Federation was formed in 1973 in Hobart, Tasmania to facilitate recognition of the new sport of open water swimming as this was not forthcoming from the pool-orientated national body. The Foundation members and subsequent office bearers were Christopher Guesdon as President, Deputy President Dick Campion, Secretary Sue Guesdon, and John Koorey as its Executive Member.