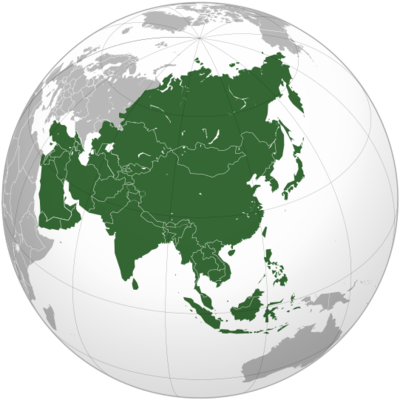 Asia is Earth's largest and most populous continent, located primarily in the Eastern and Northern Hemispheres. It shares the continental landmass of Eurasia with the continent of Europe and the continental landmass of Afro-Eurasia with both Europe and Africa. Asia covers an area of 44,579,000 square kilometres (17,212,000 sq mi), about 30% of Earth's total land area and 8.7% of the Earth's total surface area. The continent, which has long been home to the majority of the human population, was the site of many of the first civilizations. Asia is notable for not only its overall large size and population, but also dense and large settlements, as well as vast barely populated regions. Its 4.5 billion people constitute roughly 60% of the world's population.

In general terms, Asia is bounded on the east by the Pacific Ocean, on the south by the Indian Ocean and on the north by the Arctic Ocean. The western boundary with Europe is a historical and cultural construct, as there is no clear physical and geographical separation between them. The most commonly accepted boundaries place Asia to the east of the Suez Canal, the Ural River, and the Ural Mountains, and south of the Caucasus Mountains and the Caspian Sea and Black Sea.

Asia is part of Continents Seven, a series of 7 different solo open water swims that is completed in all of the seven continents of Planet Earth either (1) within one year, or (2) over the course of one's career. The 7 different open water swims must be performed on all the world's main continuous expanses of land: Africa, Antarctica, Asia, Australia (or Oceania), Europe, North America, and South America.