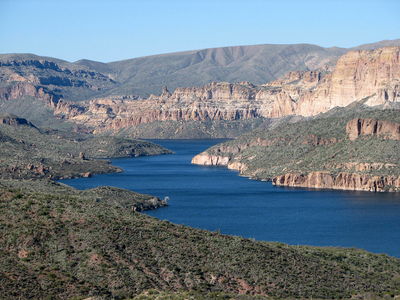 Apache Lake is a reservoir in the state of Arizona. It is also the site of the third stage swim of the S.C.A.R. Swim Challenge. Apache Lake was formed by Horse Mesa Dam which was completed in 1927. The second largest of the four Salt River Project reservoirs (Theodore Roosevelt Lake is the largest) and by far the most difficult swim if the wind picks up. The swim begins at the eastern end of the lake at the buoy line below Roosevelt Dam and continues for approximately 17 miles to the the Horse Mesa Dam. The lake separates the Four Peaks Wilderness from the Superstition Wilderness and is considered fairly remote (dirt road access). The picturesque canyon is framed by the Mazatzal Mountains and Superstition Mountains. The Horse Mesa Dam, a concrete thin arch dam, is 660 feet (200 m) long, 300 feet (91 m) high and was built between 1924-27.